It’s finally here the 50th Anniversary of the Hess toy truck. In celebration Hess has created a limited-production, individually numbered Collector’s Edition Toy Truck – a first in the collection’s history. The 2014 toy trucks will go on sale October 2 exclusively online with free shipping at www.hesstoytruck.com. After October 2nd the annual holiday trucks will be available for purchase starting November 14th at participating Hess, Hess Express and WilcoHess retail stores on the East Coast. You can post pictures or follow along with the celebration of this anniversary by visiting us them on Facebook. 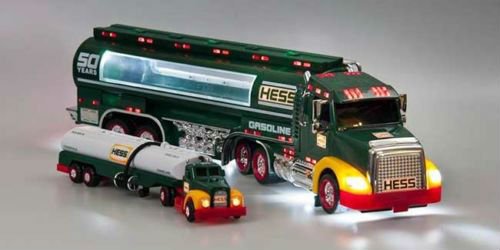 The Collector's Edition Hess Toy Truck is an extremely limited quantity model that pays tribute to 50 years of Hess Toy Trucks, with a modernized, individually numbered tanker truck showcasing within it a version of the original 1964 tanker. The elegant, solid green tanker features yellow front fenders and red accents on the front bumper and wheels offset by strikingly beautiful chrome detailing throughout. Over 100 working lights include 27 super bright LEDs - the most of any Hess Toy Truck, first ever undercarriage lighting, and interior showcase lighting in the rear compartment. A hinged door at the back of the tanker gives access to the near-replica version of the 1964 Hess Toy Truck tanker inside. The Collector's Edition Hess Toy Truck is packaged in a unique, commemorative display box and protective sleeve, and includes 3 EnergizerÃ¯Â¿Â½ batteries.

Hess Truck 50th Anniversary have sold out prices have increased

There will be two Hess trucks released in 2014

Remember beginning in 2015 you can only buy Hess toy trucks online because the Hess gas stations are being sold to new owners and the Hess stations will be renamed. You can read more about this here. Hess will be releasing two toy trucks, one is the annual holiday truck and the other is the SPECIAL limited production truck which is individually numbered. More about what these toy trucks will look like later this year.